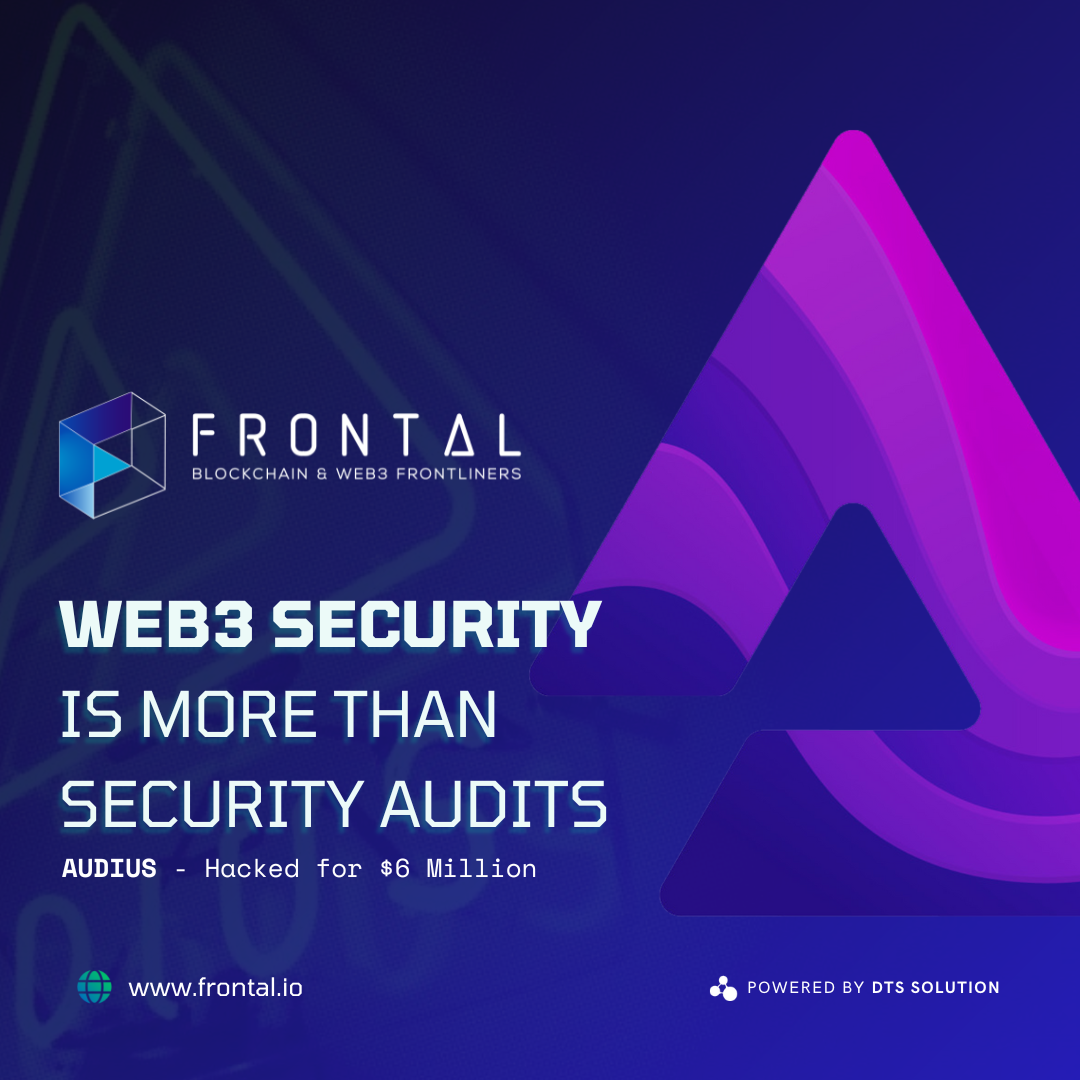 Audits are not the only priority when it comes to Web3 & Blockchain cybersecurity. Decentralized streaming music service Audius was hacked for more than $6 million worth of AUDIO tokens over the weekend, which the attacker stole from its governance smart contract. The Audius smart contracts had been audited by security groups—first by OpenZeppelin in August 2020, with further contract additions audited by Kudelski in October 2021. Even so, that vulnerability remained open in the public for nearly two years since the contracts were first deployed in October 2020.
‎
Encountered a major setback yesterday when Audius’s governance proposal #85 was maliciously confirmed on the company’s website. Hackers managed to loot over 18 million of the platform’s native Audius (AUDIO) token. At its current exchange rate, the tokens are worth an approximate $6.2 million, however, after the fraudster decided to swap the Audius (AUDIO) into Ethereum (ETH), the attacker got away with slightly more than $1 million dollars.

Hello everyone – our team is aware of reports of an unauthorized transfer of AUDIO tokens from the community treasury. We are actively investigating and will report back as soon as we know more.If you’d like to help our response team, please reach out. — Audius (@AudiusProject) July 24, 2022

After stealing 18 million tokens for $6 million, the hacker sold them for $1.08 million on decentralized exchange Uniswap, causing a slippage in the AUDIO token price. Slippage is the difference between the expected price of a token and the price when the order executes and can be expressed as a percentage or a dollar amount. One investor suggested a buyback to prevent a selloff that would drive the price down further. Another investor gave Audius an ultimatum: recover, else they are out.

Audius employs the AudiusAdminUpgradabilityProxy contract in order to permit proxy upgrades to the logic contracts of the Audius Governance system (e.g. Staking, Delegation). In its implementation, the AudiusAdminUpgradabilityProxy uses storage slot 0 for the address of  the proxyAdmin: [code]. The proxyAdmin for the Audius protocol was set to the governance system address of `0x4deca517d6817b6510798b7328f2314d3003abac` which implements various checks and balances to prevent unauthorized use (voting procedures, time delays, a community-run override process, etc.). ‍

This caused a collision with OpenZeppelin’s Initializable contract’s initialized and initializing boolean state, which are also stored in slot 0 (the first and second bytes). Because the last byte of the proxyAdmin address is `0xac`, initialized was interpreted as a truthy value. Similarly, because the second byte of the proxyAdmin address is `0xab`, initializing was also interpreted as a truthy value. This caused the initializer() modifier to always succeed:

‎
Furthermore, because `initializing` was already true, the call was not considered to be a `topLevelCall`, which meant that both `initializing` and `initialized` were left unchanged. This allowed for repeated invocations of any function which used the `initializer` modifier. Documentation for this form of attack vector & storage collision can be found [here].‍

Using this bug, the attacker was able to call the initializer method of deployed Audius contracts that implement Initializable and change storage state that is intended to be set only once in initialization. Specifically, the attacker called initialize on the Governance, Staking & DelegateManagerV2 contracts [source] [source].

Fortunately, the Audius team was able to develop and apply a patch to quickly regain control of the protocol before the attacker could do more damage.
‍ 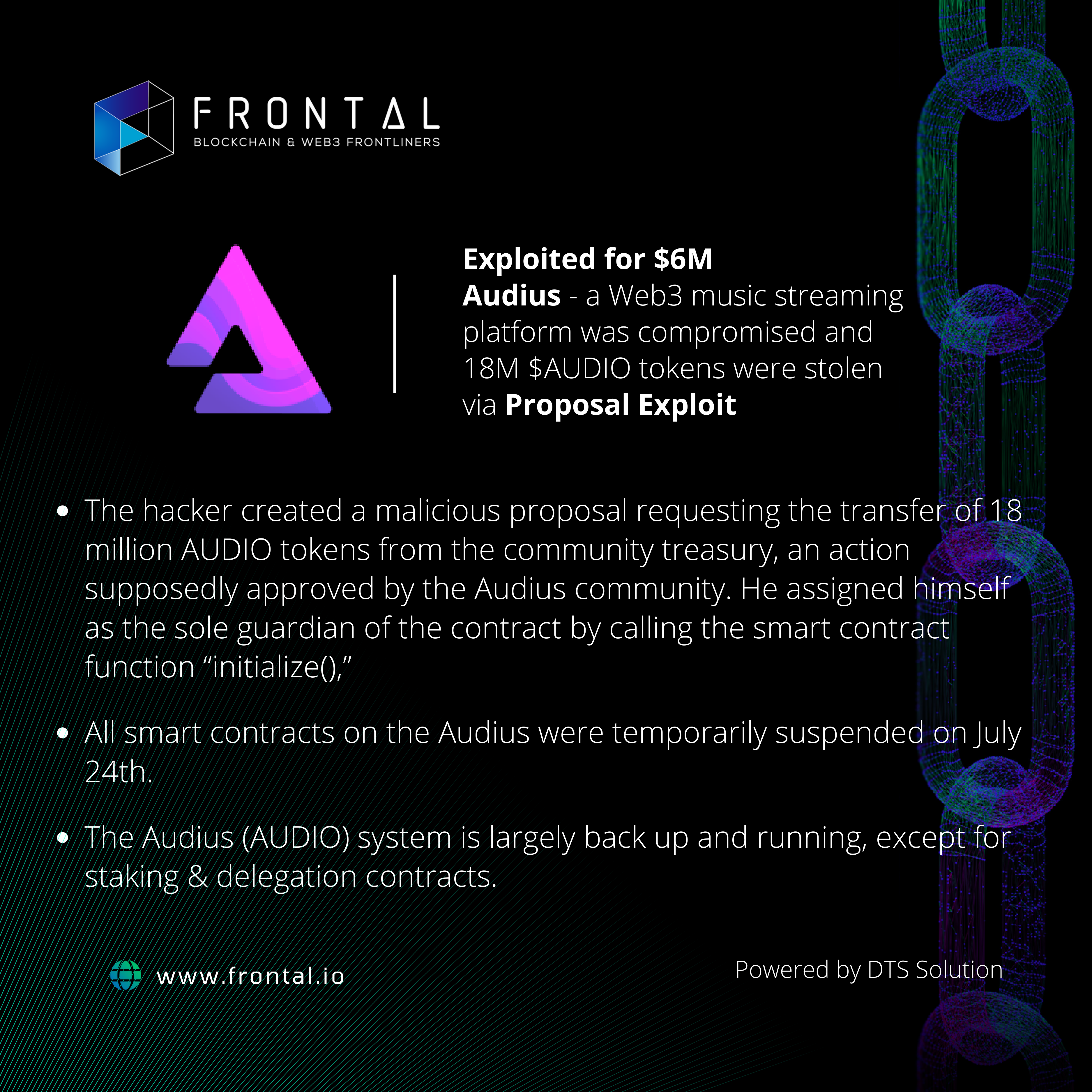