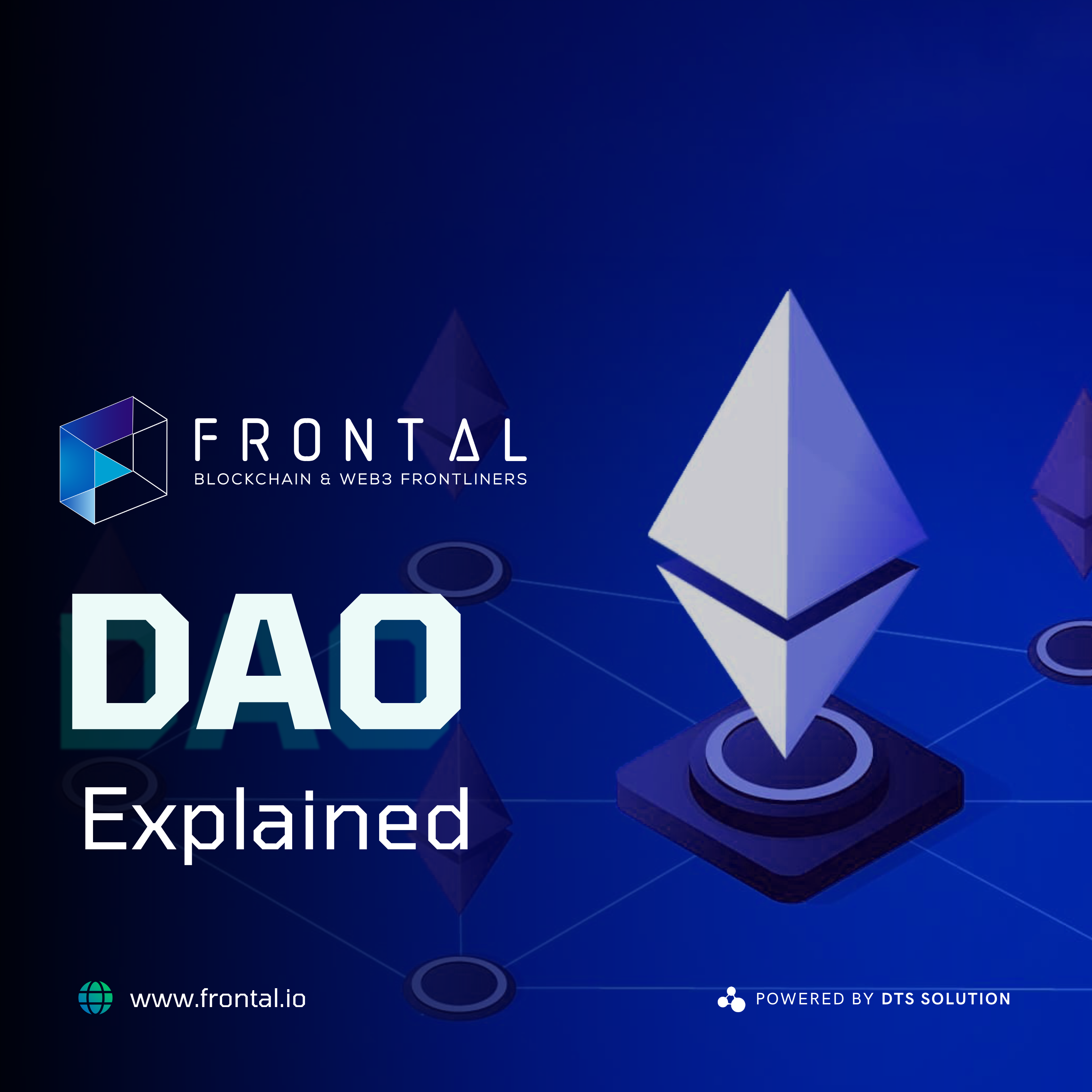 The concept of a DAO explained

Decentralized Autonomous Organizations, or DAOs, are Internet-based organizations controlled by their members and governed by rules that are encoded as transparent computer programs. In simple terms, present-day DAOs can be thought of as an internet community with a shared treasury where participants decide on how to use the money together. As a rule, DAOs financially incentivize their members via a native token. One can either buy it or earn it. If DAO expands, tokens can be sold with a profit. Unlike centralized businesses, a DAO doesn’t have a top-down hierarchy in place. Any changes made within a DAO are absolutely transparent, the consensus mechanism is the norm, and finances are allocated most fairly.

The essential elements of any DAO project

To be a full-fledged DAO, an organization requires such elements as:

The term “DAO” and a bit of history

Who coined the moniker? The first DAO was an ETH-based German startup slock (2016), a decentralized community for helping hosts find short-term tenants. Eventually, this equivalent of Airbnb turned out to be a failure due to exploited vulnerabilities in its code (3.6 million ETH in total losses). Nevertheless, it didn’t prevent the term itself from finding a way into contemporary dictionaries without the negative connotation. Quite unusual when you think of it. The concept is just really inspiring as it comes with an impressive list of potential upsides despite all the unknowns and challenges.

Viable alternatives to traditional business models, DAOs (decentralized autonomous organizations) allude to a hard-to-define concept in Chinese philosophy for a reason. Although it is a bold comparison, the natural order of things (The Way) can be likened to a smart contract that obliges everyone involved to follow a set of clear rules for achieving common goals.

The fact that DAOs are governed by their members naturally raises the question: how does one become a DAO member? Well, when it comes to DAO membership, there are two distinct models – token-based and share-based. Let’s examine the two more closely.

A DAO that relies on token-based membership has a governance token that gives its holders voting rights, allowing them to take part in deciding the DAOs future. So anyone who owns the DAO’s governance token is a member of that DAO.

The governance tokens model allows DAOs to have truly permissionless membership. Because, in general, such tokens can be traded freely on crypto trading platforms like DEXes, they are readily available to anyone who’s interested in joining a particular DAO community.

A DAO can also provide users with other means to obtain governance tokens. For example, tokens can be earned as rewards for staking, validating, proving liquidity, etc. Those mechanisms incentivize members to keep their token holdings and remain engaged with the DAO community.

Because of their capacity for facilitating permissionless membership and supporting large communities, token-based models are particularly suitable for larger blockchain projects such as DeFi protocols.

The share-based model is permissioned, although, depending on the DAO, membership might not be difficult to obtain. That’s because in most cases, anyone interested in joining a DAO can submit a proposal to become a member and has a real chance of getting approved. Such proposals typically involve making some contribution to the DAO, whether in the form of tokens or work. A share gives its holder voting power, as well as an ownership stake in the DAO’s treasury. Notably, members are free to leave a DAO with their share of the treasury.

This model is very useful for DAOs built around smaller groups of like-minded individuals that want to work together to achieve common goals. However, the model can also be used to govern protocols and tokens.

New types of DAOs get launched regularly, which makes any classification complicated. That said, most organizations of this kind fall into one of eight general buckets. Let’s briefly define each one. 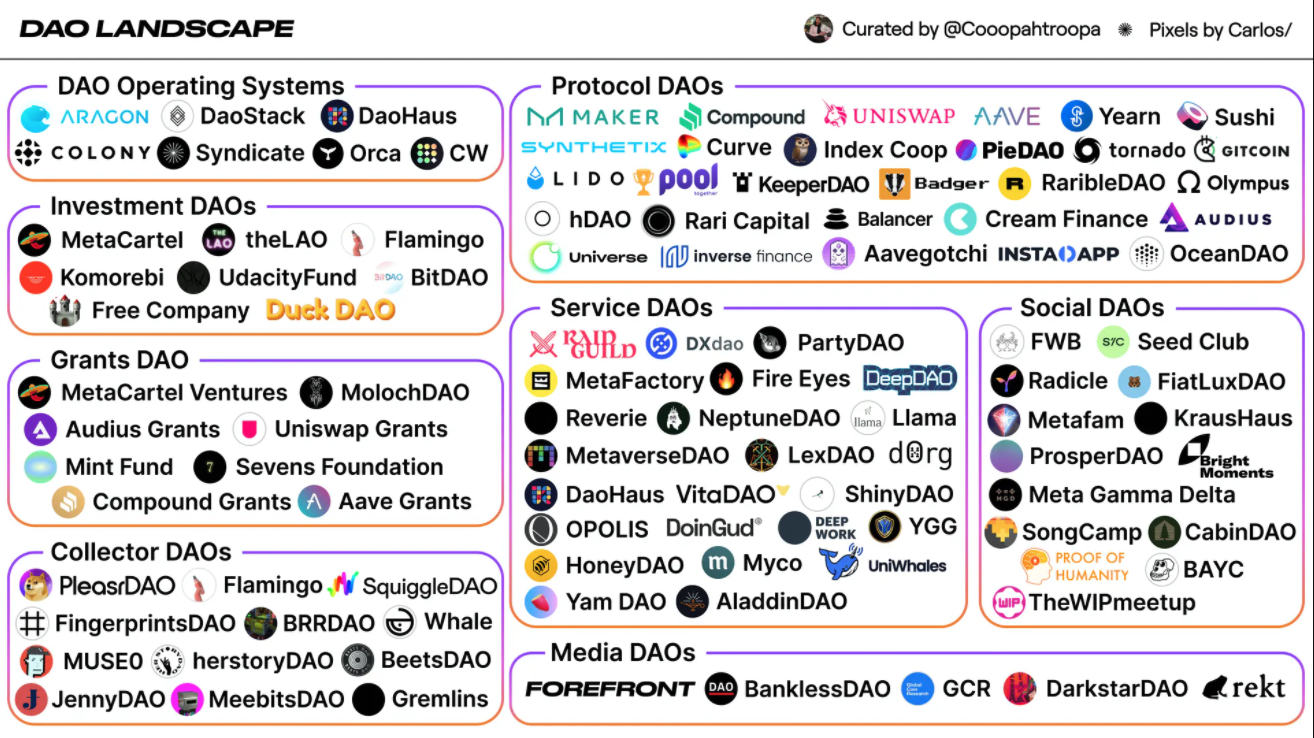 The most common of all types, it covers businesses designed to govern decentralized protocols. Examples of Protocol DAOs include:

These are community-focused DAOs whose primary selling point is creating a platform for like-minded people. One of the most prominent social DAOs is known as Friends with Benefits (FWB), a community of creative professionals and thinkers.

While traditional media can rarely be called unbiased since advertisers or third parties can influence the agenda in one way or another, media DAOs revolutionize the state of things in this sphere by producing content that is 100% driven by the community. Decrypt can be singled out as a successful media DAO that lets users vote on the kind of content they would like to see.

These projects emerge with the purpose of investing funds into web3.0 startups or gaining access to portfolios that can’t be accessed otherwise. A notable example of Venture DAOs is Krause House that wanted to become the owner of a professional NBA team.

Such projects are launched to use Web3.0 for making and receiving donations a breeze. They include separate entities like MetaCartel that helps early-stage dapps, as well as extensions of larger projects like Aave Grants, launched to fund the development of Aave Protocol.

Philanthropy DAOs get created to raise funds for a variety of causes exceptionally fast. For example, UkraineDAO makes it easier for anyone to support the Ukrainian Army to bring closer the defeat of Russia.

These projects allow their participants to unite their efforts to buy expensive NFTs and other collectibles. For example, ConstitutionDAO was launched with the mission to purchase a first-edition copy of the U.S. Constitution. This Collector DAO raised a staggering $47 million worth of ETH in a single week.

Yes, you’ve got it right: it’s a mini DAO within a DAO. These projects are launched with a focus on a specific goal. For example, to facilitate the decision-making process so that certain proposals get passed without the participation of all DAO members.